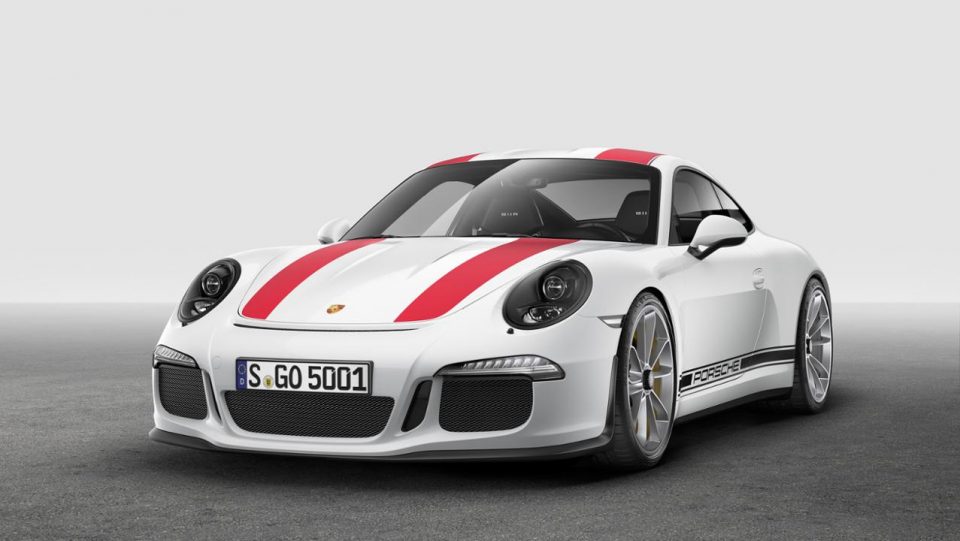 Recently Porsche took the opportunity to unveil the Porsche 911 R; a lightened, de-winged, less track-focused version of the 911 GT3 RS. We liked it. A lot.

Another 911… How Could The Porsche 911 R Possibly Be Any Different From The Rest Of Them?

Well for a start, the Porsche 911 R comes with 2 vintage looking stripes running down the centre of the body, either in green or red. There’s also carbon seats adorned with a unique ‘Pepita’ tartan design. Natty as they may be though, they don’t make the car go any faster. They are there to pay homage to the original 911 R, a road homologated race and rally car from the late 60’s.

Fancy Seats And Stripes. Anything Else New?

No, not really. But like the GT3 RS, it’s what the car hasn’t got that makes it special. Lightweight construction and the lack of a roll cage help the R shed 50kg over the GT3 RS – previously the lightest model in the 911 range.

Gone are the rear seats and glass rear windows, with the stereo and air-con also up for the chop should you tick the option. Even the rear tyres are smaller, giving away 20mm of the contact patch to the GT3 RS – a recipe for tail-happy shenanigans if ever there was one.

Other notable absences include the downforce-crazed fixed rear-wing from the GT3 RS and any form of an automatic gearbox. Instead, you get a retractable wing and a short-shifting 6-speed manual gearbox, complete with a double-declutch function for seamless down-changes.

If you would like a car wallpaper for your iPhone download one here for your desktop or computer.

So Lighter And Less Complicated, But What’s The Grunt Like?

Exactly the same as in the GT3 RS, meaning a 4.0-litre naturally-aspirated flat-six, churning out almost 500bhp and 339lb-ft of torque. Given the lack of an ironing-board sized rear-wing, top speed is up 8mph on its equally powered ‘big brother’, coming in at a conservatively listed 201mph. However, no super slick PDK ‘box means the R is a half-second down on the GT3 RS when it comes to the 0-62mph dash (3.8 seconds) – a further reference to the former’s design mantra of fun over figures. And just in case the howling flat-six isn’t quite spritely enough for you, there’s an option to spec a single-mass flywheel, allowing freer revving and improved responsiveness. More please, Mr Porsche.

Priced at £136,901 – £5,601 up on the GT3 RS – the order book is open now with deliveries set to take place later this summer. Put your deposit down fast, however, as only 991 examples will be built, all of which will be gaining modern classic status the moment they roll off the production line.

Everything About Used Car Finance

Why You Should Never Ignore Brake Repairs

Some of the Top Safety Tips For Crane Maintenance